The technical Support supplies all the technical information regarding the materials used in the construction of the products, the possible construction types, the maximum obtainable dimensions and the assembly and maintenance means.

The cantilever are designed, built and verified based on the technical norms that are listed below.

The product and all of its components is completely constructed with structural steel. The materials used are in harmony with the indications in the Directive 89/106 CEE about products for constructions and, in particular, the quality of the steel is S355JR equal to EN 10025 demonstrable with a certificate of origin written in compliance with UNI EN 10024 3.1 B.

Cantilever is warehouse equipment that, in given combinations of more elements, is able to host the material to be stored on arms that extend from the columns.
The combination of these elements is made up of two identical columns, connected by cross-beams (or bracing), and supplied with arms installed at the level on which the loads are to be positioned.

The base of the cantilever is WELDED to the column to create a single, inseparable product.

In consideration of the characteristics of the cantilever, the dimensioning of the structure based on the load requirements indicated by the client must always be done and approved by our Technical Service.

Data necessary for the correct formulation of an offer request

Once the characteristics of the load unit have been obtained, one must verify the height of the locale in which the structure will be installed, the maximum lifting height of the forklift and the available length.

If a roof is also requested, the column will be calculated to support the level of the roof.  The calculation program takes snow load and wind force of the installation zone into consideration.

In the following pages, you can see photographs of installations with roofs. In the request for an offer, one must always specify if a complete roof (with sheet metal, a conduit/a summit, roof profiles) must be offered or if we are only to offer the roof arms.

If a company is comparing the price of two offers of cantilever with roofs, it must always verify if the profiles are quoted or not.  Frequently, a client prefers to buy wood or steel profiles.

Other information of extreme importance is whether the cantilever that is installed outside will be closed with posterior or lateral cladding. In this case, it will be necessary to calculate a column that is able to support the force of the wind in the area in which it will be installed.

For loads that are characterized by different lengths or where it is not possible to obtain a protrusion of the load equal to half of the inter-axis, it is possible to create a continuous loading level.

It is an interesting alternative to the traditional pallet racking because the cantilever allows us to obtain a continuous loading level that is not interrupted by the shoulders.

The cantilever is warehouse equipment that is made up of various elements. The minimum usable combination foresees (see Fig.2):

The two semi-bases are connected to each other with an anterior closure plate and inferior "L" pieces for the fastening to the ground of the structure and to reinforce the union.

The base does not exit by itself but it always combined with a specific column.
The base is welded to the column.

The column is the vertical element for the support of the arms.

The column is made up of two "C" shaped metal profiles that face each other and are welded to form a single box shaped profile. The two "C"s are tapered starting from the base towards the top to form a trapezoidal vertical plane along the warehouse.

The two "C"s are supplied, starting from a fixed quota where arms cannot be positioned, with a series of punches at a step of 76 mm.  These punches have a rectangular shape and are slightly inclined.  They are for the insertion of the pin.

Small plates are welded to the transverse sides of the columns for the fastening of the bracings.

The arm is a dismountable component (see Fig. 2) and constitutes the element on which the User will deposit the loads to be stocked. A load usually rests on a minimum of two arms (except in the case of cantilever used for the storage of spools or coils which are put one per arm).

The arm is the protruding element destined to accommodate the loads and is made of the arm and a connector, which are welded together.

The connector is the element that allows the arm to be fastened to the column with a pin.

The fact that one must use more than one column at the same time to stock the load requires that the punches for the fastening of the arms be at a standard, repetitive identical distance for all columns (76 mm).

In a well-constructed cantilever, it is always possible to move the vertical position of the arms and vary their number.  One must ask beforehand for a verification of the new load layout of the cantilever.

The User cannot make any variation to the original configuration (for example, adding extra levels) without previous approval from the Producer.

In the case that it becomes necessary to make modifications, the User must consult the Producer who will verify the new configuration requested reserving the right to approve it or not.  Only approvals made it writing will be considered valid.

A column never exists by itself.  A specific base that optimizes a certain application always accompanies it.

The connector (see Fig.2) of the cantilever is a robust "U" shaped bracket that "hugs" the column to which it is fastened with a pin.

The cantilever bracket is made with two punches that coincide with the punches present on the column to allow the insertion of the rectangular bar that is the pin.

The cantilever connector is welded to the arm to constitute a single piece.

Details of the arm and the connector.

The pin (see Fig.2) is a bar made of special steel that constitutes the fastening element of the arm to the column.  Once inserted, its length allows it to extend noticeably on each side so that it cannot come loose with vibrations.

The shape of the pin and that of the punches on the connector and the column allow the blockage of the pin in position once the arm has been installed.

The cross-beams, or bracing of the cantilever (see Fig. 7), are elements inserted between the columns to create the distance and allow the stabilization of the columns in the longitudinal plane.

They are of various shapes based on the entity of force that they are destined to support and based on the distance between the columns.

The anchors are generally made with a threaded bar that is inserted in the weight-carrying pavement of the cantilever.  It guarantees the hold either with mechanical expansion of a metal sleeve or with a structural resin.

Emaf proposes optimized complete structures (column - base - arm).  These structures are calculated starting from the data supplied by the client.

Since the column is tapered and the depth decreases from the bottom towards the top, the base will always extend beyond the arms.

The single-sided cantilever base is fastened to the pavement in three points: in correspondence to the upright, at the free extremity of the base and at the intermediate point between the previous two points.

The double-sided base is fastened to the pavement in correspondence of the two points at the two free extremities of the base.

The fastening to the pavement with the adequate anchors is done using the plates welded between the two semi-base hulls and after having levelled the structure.

On the horizontal plane, the free space between the loads stocked must be equal to 100 mm. or more at least.  This distance must be increased in the case of particularly high loads or those characterized by an unstable vertical collocation.

On the vertical plane, the free space in height between the arms must be calculated using the maximum height of the load to stock plus a minimum margin of 100 mm.  This is to avoid that the loads collide with the arms above or below them during their movement.

This distance must be increased in the case of loads positioned at a considerable height or of those made of material having an unstable vertical collocation.

5. CANTILEVER: EXAMPLES OF USE

It is necessary to remember that everything that is stored on the ground can be stored on a cantilever. Here below are some proposals of the most common uses for these structures:

Cantilever for the storage of wood:

The structure shown in the picture also foresees a roof.  It is possible, as in this case, to supply a complete roof (including, therefore, the profiles for the roof, a conduit or a summit, sheet metal roofing and gutters).  Nonetheless, our steel profiles can be substituted with wooden profiles and all the components of the gutters can be bought elsewhere.  It is necessary to specify in the offer request which articles must be quoted.

It is also necessary to specify the desired inclination of the roof arms (downwards or upwards). 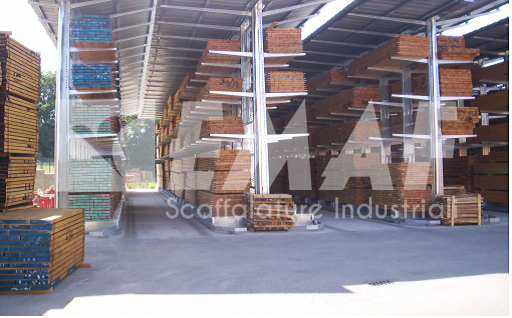 In the case of a roof, the structure is calculated to support this level.  The calculation program takes into consideration the snow load and the force of the wind of the installation zone, based on the existing rules. 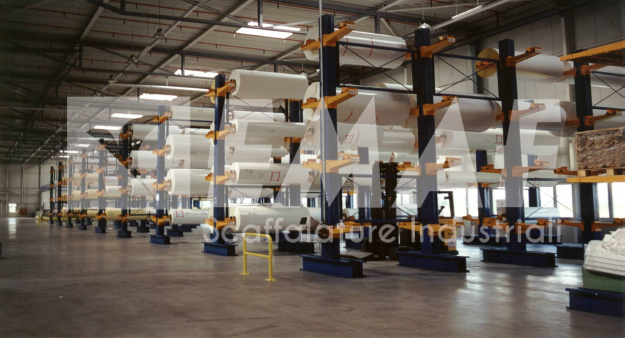 The buyer is required to study the contents of this document, to apply the prescriptions and to inform those who will assemble it, those who will use it and those who will maintain the product they accompany of its contents.

This document constitutes the certification that the product it accompanies is designed and produced based on the existing rules (see the rules listed above).  Therefore, the user is guaranteed in the use of the equipment based on D.Lgs. n.81.

This paragraph supplies information about assembly.

In particular, if the client plans to assemble the rack himself, he must be reminded of the following:

RULES FOR CORRECT USE AND MAINTENANCE

Indications for the personnel using the structure are supplied in this paragraph.  Among these, the obligation to work in full respect of the existing rules for the prevention of injuries, not to change in any way the original equipment, to respect the indications of the maximum allowed carrying capacity (carrying capacity signs) and to make periodic checks that the foreseen tolerances are respected in the racking.

It is also the personnel's responsibility to carefully check the integrity of all the arms and the correct position of the pin with respect to the column.  This operation is obligatory and must be done at least after the first two or three cycles of use of the arm.

The personnel Is also required to substitute damaged elements and to verify that the carrying capacity signs are kept in their place and are clearly visible with the indications of the maximum carrying capacities allowed.

Any cookies that may not be particularly necessary for the website to function and is used specifically to collect user personal data via analytics, ads, other embedded contents are termed as non-necessary cookies. It is mandatory to procure user consent prior to running these cookies on your website.